I am an I am. My self-awareness allows me to contemplate the fact that this pen I am holding (all of my digital blogs start out on a sheet of paper) occupies some amount of space and time. But why does this pen have mass? Maybe a better question would be: how are the constituents of atoms interacting to give me the impression that this pen has mass. Is space-time truly the fabric of not only our physical universe but all of reality? Let’s delve deep.

A strange and curious thing happened in the century immediately preceding our own – matter became wavy. Whereas the Greeks were trained to see the cosmos as a billiard ball game of atomos once Democritus arrived on the scene, the New Scientists of the 20th century like Erwin Schrodinger, Werner Heisenberg and Richard Feymann, saw a duality to nature that had until then been obscured by Newtonian physics. Their conclusion: it would seem that our physical solidity is a partial illusion.

In order to explain this assertion let’s walk through an experimental series that many neuroscience and physics undergraduates are quite familiar with. Imagine yourself as a pulse of light which was shot from a laser at one of two openings. There is a wall behind the slits that will be your resting place. When the wall is observed post-impact, it is discovered that not two impact bands exist but three! And one is darker than its siblings. What are we to make of this?  Consider the following: the movement of light can be measured at the photon level and when a particle passes through the slots, if an observer is aware of the slit, then three bands are not observed, but rather two. Therefore when an observer is unaware of the movement of the particle, it acts as a wave and creates what is known as an interference pattern (the light and dark strips). The traditional view is that the electron is like water and it passes through both slits are once, creating daughter waves that will either interact in a way to increases their amplitude or brings their amplitude to zero. Can we perhaps think about this result in a different way? Perhaps the wave can be understood as a series of probabilities: did the photon go through slit A, did the photon go through slit B, did the photon not go through slit A, did the photon not go through slit B. did the photon not go through either slit A or slit B? Why would it be that it is not until there is conscious awareness of the slit of passage that the probabilities collapse and the observer sees distinct bands of light that correspond to the physical slit locations? Truly fascinating….

In the aftermath of what become known in college classrooms all over the country simply as the double slit experiment, quantum physicists began to theorize that the universe on the most minuet levels is itself probabilistic. Since the original simple light experiments by Thomas Young in 1801, it has been observed that even microclusters up to 810 atoms exhibit this duality [3]. Physicists who devote themselves to this branch of physics probe the energies of and behaviours of the smallest entities in existence. Quarks leptons, force carriers, nucleons and theoreticals – the quantum world is truly an odd zoological ecosystem and experiments at CERN ensure that the particle zoo catalogue is constantly being updated.

Conseil Européen pour la Recherche Nucléaire (CERN) was founded in 1952 as Europe’s primer foundational physics research institution. Located on the Franco-Swiss border, this institution houses particle accelerators, detectors and other complex scientific equipment necessary to study the fundamental particles which are theorized to be the basic constituents of matter [4]. There are numerous examples in politics where European powers do not agree, however physics and the nature of reality is a strong uniting force among these states. CERN was one of Europe first joint ventures and now boasts a membership of 22 states [ibid]. 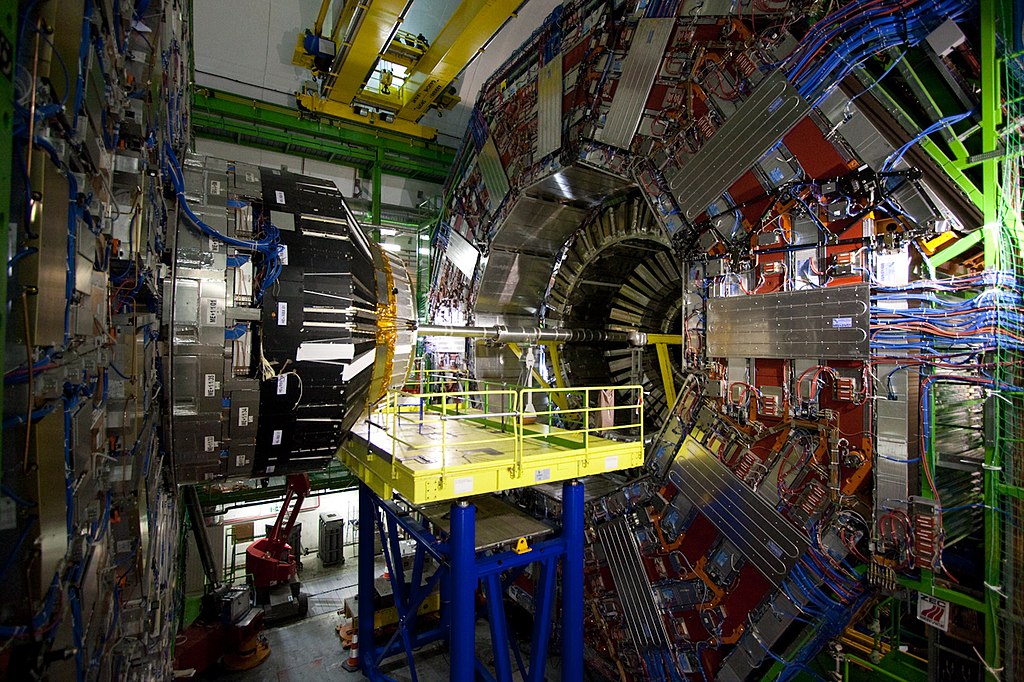 [5] Inside the bowels of CERN. Notice the size of the particle tube relative to the entry and exit ports.

What are some of the newest, coolest data coming out of this institution? One thing that immediately caught my eye when snooping around for cutting edge experiments was the reality of antimatter. Nobel Lauderate Paul Dirac in 1928 predicted, through the combination of quantum theory and special relativity, that matter can exist in an inverted form [6]. By inverted I mean that electrons have a positive charge and protons a negative charge. What does antimatter tell us about the nature of reality? Writer Dan Brown seemed to think that antimatter was some pretty serious stuff. His book Angels vs. Demons opens with the death of a physicist from CERN and the thief of a vial of that precious cargo. Anyways, it is theorized that the big bang should have created equal amounts of both matter and anti-matter [ibid]. Strangely enough there is an extreme predominance of matter. A new Extra Low Energy Antiproton (ELENA) decelerating ring came on-line on Aug 2 and its capacity to decrease the momentum of anti-entities and to trap larger quantities of these anti-entities should assist physicists greatly in the exploration of this enigma of physicality [7].

Weirdly enough within that zoo exists a set of particles called virtual particles. Heisenberg is known for his uncertainty principle which states that knowledge of an elementary entity’s (I use entity here because this term lacks bias. Elementary particles is no longer a sufficient term given what we know of their wave nature) momentum precludes one from gaining an understanding of that object’s location and vise-versa. But he also discovered that the thermodynamic law about conservation of energy and motion can be violated on the quantum scale, with the caveat that this non-conservation doesn’t persist for too long [8] Be that as it may, electrons are constantly surrounded by those non-conservative spaces! [ibid.] For example, a photon being emitted by an electron is a virtual event [ibid]. But it does not stop there. Photons are massless energy packets but we are now not only positive that energy is constantly being created but also matter. According to Scientific American,”[q]uatum mechanics allows, and indeed required, temporary violations of conservation of energy, so one particle can become a pair of heavier particles…which rejoin into the original particle as if they had never been there.” [9] And here I thought that the law of conservation of energy and momentum was sacrosanct…, as fundamentally necessary to our understanding of this universe as gravity. What is going on?!

[10] Artists rendition of the quantum foam.

Ok, so I’m sure that I am uncertain about the existence of my pen. With all of these particles popping in and out of existence how is it that the pen manages to hold any semblance of integrity? Surely the answer lies with the attractive force of gravity. Natural force fields such as those associated with electricity, magnetism, and subatomic particles are the focus of quantum theory [11]. Quantum gravity represents the newest iteration of this theory. According to Quantum Bounce from the New Scientist Collection,” a successful theory of quantum gravity…would explain how gravity behaves over small distances, such as those in the centre of a black hole[ibid].”  Dark matter,  dark energy and black holes, what a vernacular Einstein’s equations have left us with. Far away from the brilliant brightness of the stars is mystery and intrigue that seems almost insurmountable. Einstein’s theories predict that the centre of a black hole is a singularity in which the laws of physics breakdown[12]. That conclusion is pretty disconcerting to modern physicists. Theories such as quantum gravity and its daughter theory loop quantum gravity are perhaps our best attempts of make sense of a head scratching paradox. M-theory, an 11-dimensional superstring theory, and the brane theory (our universe is a 4th dimensional brane in a sea of similar branes) are both examples of theories of quantum gravity [13].

Momentum and energy are at the heart of quantum mechanics. A mediation on the external world has lead may great natural philosophers and physical scientists to the conclusion that any satisfactory theory of physicality must include momentum, energy, matter, force, space, and time. (To be honest I don’t think most scientists push the envelope far enough. Any half-way decent theory of reality must, in my opinion, deal with the enigma of consciousness as well.) How can we make sense of the remaining concepts that construct our physicality? In the next post we’ll tackle the fascinating theories of Albert Einstein – a forgetful man who believed in a higher cosmic power and did not care if he wore the same clothes a few times in a row. His theories of special relativity and general relativity have inspired and assisted generations of scientists in understanding the relationships between gravity, matter/energy, space and time. Our understandings of the universe have evolved greatly since he walked among us which begs the question: is Einstein still relevant?